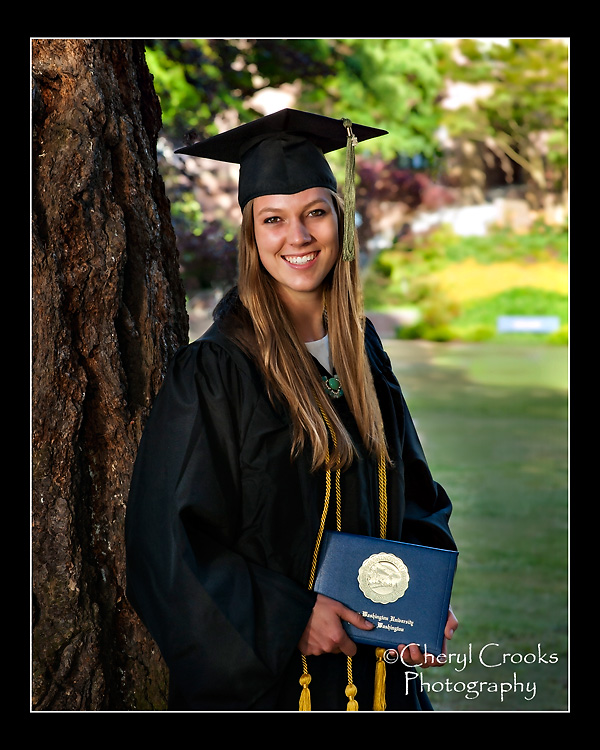 Every year about this time I get a little sad.  That’s because it’s graduation time for many high school and college students. To be sure, they deserve to celebrate their years of hard work and accomplishment. But for me, the celebration is bittersweet when I have to say “Good-by” to my studio assistant.  I haven’t had to do this for three years so I guess I should be grateful. Still, I got a little teary-eyed when I said farewell and best wishes to my studio assistant, Megan Marler, on Thursday .

Megan graduated with honors from Western Washington University (WWU) this week with a Bachelors of Science in Kinesiology.  She headed out-of-town early Friday morning for a road trip to her home back in Colorado where she will soon be married on July 5.  I can hardly believe that it’s been a little more than three years since she first contacted me about the possibility of working with me as my assistant.

I was pretty impressed with Megan right from the beginning. She ‘cold-contacted’ me about working me after searching out my information on-line. She already had worked in the studio of a Colorado photographer. It so happened that my previous studio assistant, also a Western student, had just recently graduated and moved back to her home in Indonesia, when Megan contacted me.  The timing couldn’t have been better.  Megan hadn’t yet arrived in town but we set up a time to meet once she got here.

Although she had an interest in photography, she planned to pursue an education that would lead her to physical therapy or something similar. I don’t remember now how it was she came to enroll at WWU, but I’m glad she did.  It didn’t take her long to settle into student life here.  She quickly made the university’s women’s crew team. (I was thrilled to learn this, having covered rowing at the 1984 Olympics for TIME Magazine.) Her height, six-foot, and strength clearly gave her an advantage, both in rowing and as my assistant. I jokingly tell my clients when we’re on location with my assistant that they are my ‘human light stand’. But it’s hard work as they must hold and position my reflectors in order to place my light just as I want it on my subject. Sometimes they are standing in the weeds, in the water or on the rocks just out of my camera’s view, but close enough so that I get the light I want. Megan learned quickly and was often able to anticipate exactly where I’d like her to go before I even directed her.

She excelled on campus in her classes and on the row team. Her classload wasn’t ever light but she managed to do well in them all. At the same time, she was up every weekday, on the water and ready to practice with Western’s crew team by six a.m.  It didn’t take long for this inexperienced rower to make the varsity eight-woman boat. WWU’s women’s crew team is nationally regarded and they prove it year after year by having been selected to compete in the NCAA Division II National Rowing Championships 13 years straight.  They won the national title seven consecutive years from 2005 to 2011. Megan was on the team that represented WWU in 2013 and 2014, and went with them to Nationals in 2014 to win third.  The team wasn’t chosen to go to this year’s Nationals. But Megan, and four others of her teammates, were named National Scholar Athletes by the Collegiate Rowing Coaches Association.

Besides being on the crew team, Megan somehow found time to help coach a local girls select soccer team, stay active in her church and ‘job shadow’ with a local physical therapist. I have every confidence that she’ll continue to do well no matter what path she chooses to take in the life ahead of her. I will miss her big smile, conscientious work ethic, attentiveness to detail and cheery outlook every time she stepped through my studio door. I’m proud to have had her alongside me for countless photo sessions and in the studio doing work for me far below her skill level without complaint. I’m sorry to see her go, but at the same time excited to see where she goes next. Congratulations, Megan!