One hundred years ago today, May 10, 1912, ground was broken for the construction of the Federal Building in downtown Bellingham which houses the Federal District Courtroom, seen here.  The courtroom, with its beautiful oak woodwork, plaster medallion vaulted ceiling and arched, pane windows is a visage from the past. The setting resembles that of many a courtroom drama, real and imagined, and instantly calls to mind scenes  of “Inherit the Wind” or “To Kill a Mockingbird.”   Bellingham’s Federal Building is now owned by the city.  Studies and discussions are underway to decide how best to restore and repurpose this historic building so that it might continue to be the cornerstone of downtown. 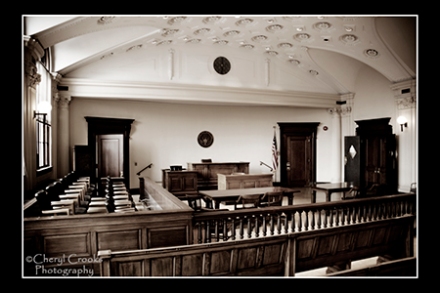 I made these images after staging a photograph here for the cover shot for the current issue of the Cascadia Weekly.  For me, staying a few extra minutes to photograph this lovely interior was a bonus.  Afterwards, I was given a tour of the rest of the building by the planner/consultant who’s working with the city’s agency to find funds and grants to preserve this structure.  Let’s hope they do.  It would be a sad thing to lose this fabulous architectural edifice. 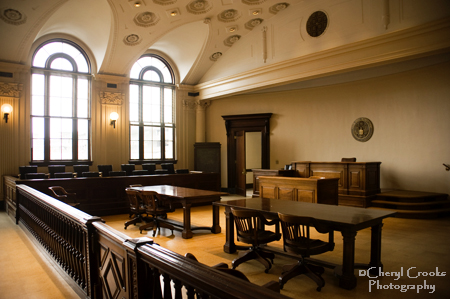 Since the late 1960s, the Federal Building has been the site of regular weekly Friday afternoon protests, probably the longest continually running protests in the country.  About 4 p.m., the protestors, many of them with graying hair now, gather on the corner with signs bearing the slogans for the week, usually along the lines of “Peace Now” or “Bring U.S. Troops Home”.  Members of the group all seem to know one another and after their hour-long demonstration, which sometimes extends longer, they often share a bite of whatever food they brought with them.  People walking by on the sidewalk or driving by in their cars give them a thumbs up or a friendly honk on the horn to show their support.  And they know, rain or shine, that the protestors will be there again next week, just like they have been for the past nearly 50 years. 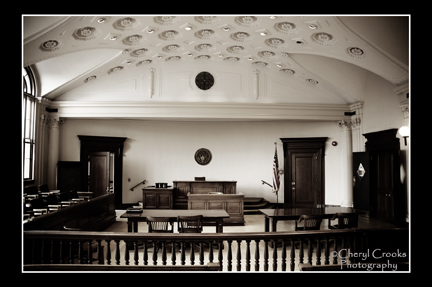